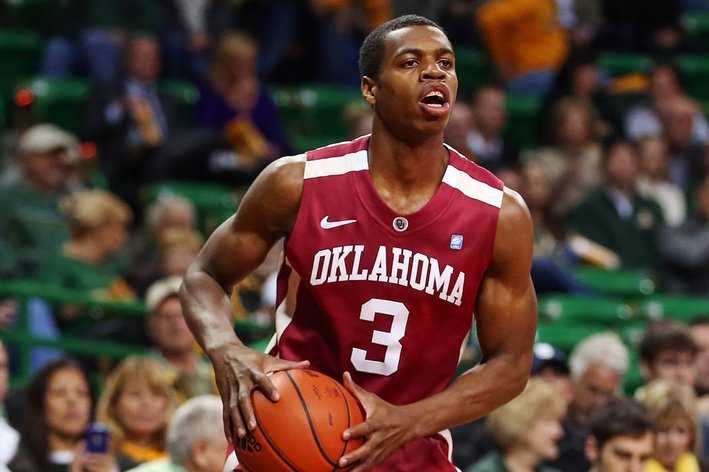 College basketball players are having a tough time this season with foot and ankle injuries.
The latest player to fall victim to a foot injury is Oklahoma freshman guard Buddy Hield, who suffered a broken bone over TCU in a 75-48 win on Monday. He too suffered a fractured fifth metatarsal in his right foot, but unlike Antonio Barton, his injury will require surgery. Hield will be out 4-6 weeks after having surgery on Tuesday.
Hield suffered the injury while fighting to get through a screen set by a defender. He stepped on the foot of a TCU player and grabbed his foot as he limped off the court.
The freshman worked his way to the starting lineup and has been a well-needed spark for Oklahoma this season. Oklahoma is fourth in the Big 12 this year with a 7-4 record. He averages 8.6 points, 4.5 rebounds, and two assists per game, making him fourth, third, and second, respectively on the team. He also leads the team in steals per game.
"I look at him as a little brother and it always hurts to see a family member drop down," said OU forward Romero Osby. "He is in good spirits and hopefully he stays in good spirits. He is just one of those guys that he is going to contribute to the team no matter what he is doing. We are just going to try to continue to win for him and continue to play hard for him."
Without Hield, senior Stephen Pledger will pick up in the back court and expect freshman guards Isaiah Cousins and Je'lon Hornbeck to get increased  minutes.
If you are a basketball player and have a foot problem, call our Newington, Kensington, or Middletown office to make an appointment.
Craig M. Kaufman, DPM
Connecticut Foot Care Centers
Sports Medicine Podiatrist in CT
Podiatrist in Newington
Visit our website, friend and like our page on Facebook, and follow our tweets on Twitter.